CHOOSE FROM A VARIETY OF STONE

Since 1997 our team at Hog Lick Aggregates has been providing North Central West Virginia with quality aggregate stone products. 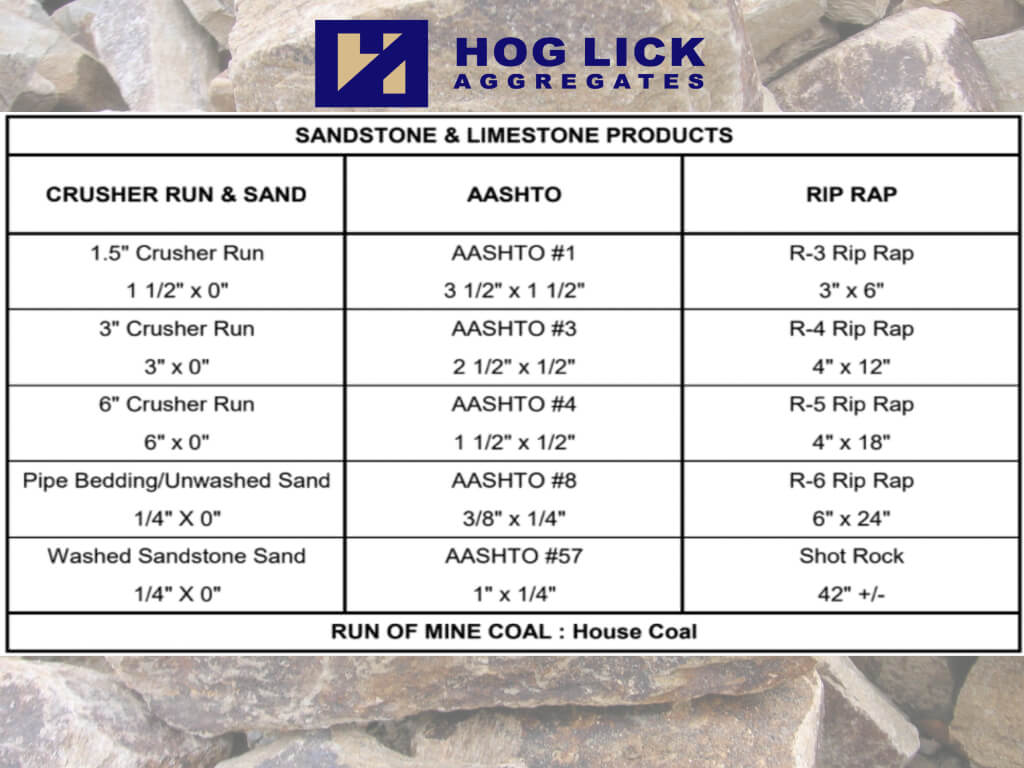 What Is A Crusher Run?

Crusher Run is primarily used as a compacted sub base material. In fact, it is a mixture of coarse and fine aggregate that forms a solid, level base of support. In addition, Crusher Run is typically placed underneath driveways, concrete slabs, and structural foundations.

• For driveway installation, a foundation of crusher run can add years to your driveway’s life. The durable and compact nature of the material will prevent the surface material from developing potholes, cracking, or shifting under heavy pressure from vehicle traffic and the elements.

• When excavating to install underground utilities such as pipes, cables, and conduit, crusher run acts as a reliable backfill that holds soil and the installed utilities in place.

The American Association of State Highway and Transportation Officials (“AASHTO”) has developed standards for using aggregate in not only highway construction. But also, for general use. Aggregate is classified according to a broad range of AASHTO sizes. Which, include sand, gravel, crushed stone, large stone, slag and recycled concrete. Generally speaking, aggregate is used in many ways in construction. As a matter of fact, it is used as a load bearing material, a filling material and an infiltrating material.

• Aggregate is used to resist the overall static as well as dynamic load, in roads and railway ballast. Not only, to distribute the load properly to the supporting ground. But also, to drain the water from the surface.

• When using concrete, aggregate is used for economy. For the purpose of, reducing shrinkage and cracks. Also, to strengthen the concrete.

• Aggregate is used to screen, filter, and drain water, in not only water filtration. But also, pipeline construction and sewage treatment processes. In addition, it provides load bearing bedding.

What Is Rip Rap?

The term “Rip Rap” describes a size range of aggregate that is 4” and larger. Rip Rap is not only very durable. But also, has a natural look due to its size. For this reason, it is typically placed along shorelines, waterways, bridge foundations, steep slopes and other locations to protect from scour and erosion. As a matter of fact, the proper sizing of Rip Rap to be used depends on several factors. Which include not only the steepness of the slope. But also, access requirements and exposure to the elements. As an example, larger Rip Rap is used where a structure or shoreline is continuously exposed to rushing water. Such as:

• Along the outer bank of a river bend. Which, dissipates the force of the water against the bank.

• Also, near bridges not only along embankments. But also, adjacent to supports in waterways.

Benefits of Limestone and Sandstone

Limestone and sandstone, are two of the most common sedimentary rocks that can be purchased at the Hog Lick Quarry. In fact, it is conveniently located in Marion County. Which, is just 3 miles off of the I-79 White Hall exit in Fairmont, WV.

Limestone is a sedimentary rock composed mainly of calcium carbonate. Additionally, it is usually in the form of calcite and aragonite. Limestone has a variety of uses including not only construction. But also, can be used in road material and water treatment.

Sandstone is a sedimentary rock that consists of sand or quartz grains compressed together. Also, it is known for being one of the most common types of sedimentary rock. For the most part, sandstone is used primarily in construction, cement and environmental remediation.

Limestone and Sandstone for Construction

Limestone and sandstone are not only used as building materials. But also, used to make cement when crushed into powder form. These materials are used to create a stable base prior to paving with asphalt, pouring concrete or covering with gravel. Especially, in the construction of roads and foundations, Limestone and sandstone are the most popular natural construction materials. Due to their density and extremely durable rock composition.

Limestone and Sandstone for Water Treatment and Environmental Remediation

Many wells have acidic water (low pH) that may also contain high amounts of iron or iron byproducts. Limestone aids not only in increasing the pH of the acidic water. But also, in removing iron and other materials. It is important not to change the pH of a water source or the surrounding soil. Especially, in certain environmentally sensitive areas. In such instances “pH neutral” sandstone can be used to have negligent impact on the existing pH of the environment.

Sandstone is one of the most popular natural construction materials, due to it’s dense and extremely durable rock composition. Many builders and homeowners choose sandstone for their interior and exterior home structures. This is mainly due to the aesthetics of the stone, and the easy installation process that only requires portland lime or mortar to bond the stone together.

FOR PRODUCT PRICING, PLEASE REACH OUT TO US FOR A FREE QUOTE

GET IN TOUCH WITH US